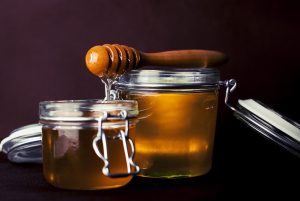 Honey is a sweet liquid made by honey bees from the nectar they produce from flower pollen and contains 17 to 20 percent water and 76 to 80 percent glucose. It also contains fructose, wax, mineral salts, and pollen. The color and composition of honey depends on the type of flowers the pollen came from. Examples are white honey from alfalfa and clover; reddish-brown honey from heather; amber hue from lavender; and straw color from acacia and sainfoin.

An average bee colony is capable of producing approximately sixty to one hundred pounds of honey per year. Bee colonies are divided into a 3-tier organization of labor that includes 50,000 to 70,000 workers, a queen bee, and about 2,000 drones. Worker bees, responsible for collecting the pollen, only live for three to six weeks and each one produces about a teaspoon or 5ml of nectar. It requires 4 pounds (1.8kg) of nectar and about two million flowers to produce one pound of honey (0.454kg).

The honey making process starts off with honey bees working tirelessly to collect pollen and nectar from flowers to feed their entire colony and the process ends when the honey gets bottled using automatic filling systems to get ready to be sold. The nectar is broken down into simple sugars and stored in their stomachs. This nectar is then passed from one worker bee to another until the water content has diminished at which point it turns into honey which is stored inside the honeycomb. The unique design of the honeycomb combined with constant fanning by the wings of the bees causes further evaporation until a sweet liquid called honey is produced.

The Manufacturing Process of Honey

1. First, the honeycombs are removed by a beekeeper, wearing protective clothing and a veiled helmet and gloves to avoid stings. As soon as the bees in the honey chamber realise that they have been separated from the queen, they move to the brooding chamber through a hatch designed in such a way that it prevents them from re-entering the honey chamber by a separator board inserted about 2 to 3 hours before removing the honeycomb.
The beekeeper will test the honeycomb to see if it is ready by shaking it. If honey leaks out it will be returned to the honey chamber to mature for several days more. About one third of the honey is left behind to feed the colony.

2. Honeycombs that are about two-thirds capped are then put into a transport box and transported to a room completely devoid of bees. The beekeeper then uses a long-handled uncapping fork to scrape the caps from both sides of the hive onto a capping tray.

3. Next, the honeycombs are placed into an extractor with a large drum that uses centrifugal force to extract the honey from the hives. As the drum spins the liquid honey is drawn out and ends up against the walls. The extracted honey is then poured into containers and transported to commercial distributors.

4. At the commercial plant, the honey is heated in tanks to 120 degrees F or 48.9 degrees C to melt the crystals. It is left to remain at that temperature for a period of 24 hours.

5. The honey is then flash-heated to a temperature of 165°F (73.8°C) and strained through a paper filter before being flash cooled down to 120°F (48.9°C) again. This procedure is performed very quickly in about 7 seconds. Although this heating procedure removes a certain amount of the healthful properties of honey, it results in a lighter, brighter colored honey that consumers prefer. A small percentage of about 5% is left unprocessed and unfiltered and merely strained as there is a market for this type of darker, cloudier, unprocessed honey.

6. The processed honey is then packaged in jars for shipment to commercial and retail customers.